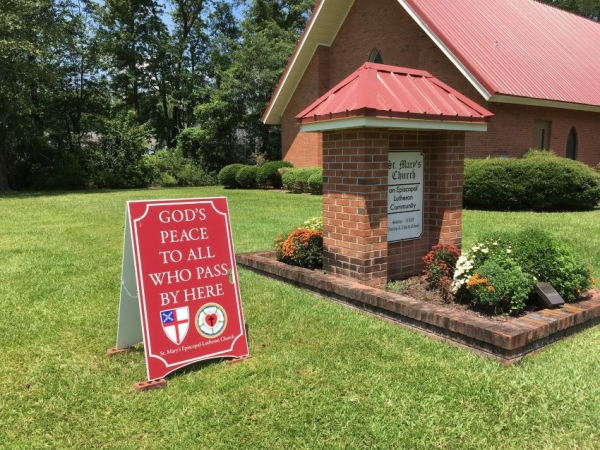 Episcopalians have worshiped at St. Mary’s for over 100 years! Now offering both Episcopalian and Lutheran services, St. Mary's supports the local community through participation in the Wounded Warriors Project and other outreach initiatives.

St. Mary’s Episcopal Church was dedicated in 1908. It was a white brick structure with a bell tower built on West Wilmington in downtown Burgaw. There was a small congregation but services were held weekly with the clergy or lay readers from Wilmington.

The building was in poor repair and in 1977 the congregation decided to erect a new building on South McNeil Street on a lot that had been deeded to the church several years earlier. Through fundraisers, help from the diocese of East Carolina, and the generosity of members, friends, and the public, a new brick church building was built and dedicated on May 25, 1978.

A notable population increase in the Burgaw area brought Lutherans who then discovered there was no Lutheran Church in the vicinity. It was clear to St. Mary's that we could accommodate both church traditions in one congregation. With the approval of both the Episcopalian and Lutheran bishops, the congregation and a new ministry evolved.

The windows above the altar are from the original church as are the altar, pews, Bishop's and Priest's chairs and many other furnishings.

Episcopalian worship every Sunday at 11 a.m.

Lutheran worship the first Sunday of the month at 11 a.m.

The mission of St. Mary's Episcopal-Lutheran Community, Burgaw, is to witness the love of God in Christ for all people. To this end we commit ourselves to faithful worship as we gather together around Word and Sacrament, share our resources with those in need and invite all to share our life in Christ.

Episcopalians have worshiped at St. Mary’s for over 100 years! Now offering both Episcopalian and Lutheran services, St. Mary's supports the local community through participation in the Wounded Warriors Project and other outreach initiatives.

Thank you for your interest in supporting the Ministries of Saint Mary's !

You can donate by check or online with a Credit Card:

To send a check to our office: